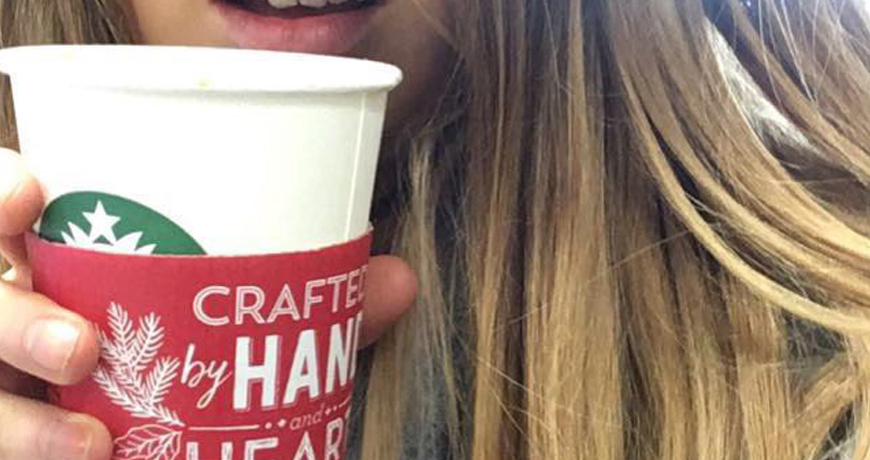 Christmas coffee lovers in the UK have been disappointed this festive season to find their favourite festive coffees are no longer served in Starbuck's iconic red cups.

Last year Starbuck's opted to serve its Christmas coffee range in a stylish plain red cup, mirroring the fashionable minimal and flat design trend we're currently going through but many found this offensive claiming that Starbucks were making a negative statement by dropping classic Christmas imagery. Previous years saw cups decorated with snowmen, ice skates and holly and ivy but this year's design... well, it's nonexistent!

Lovers of Starbuck's red cups rushed to their local stores on their launch day this year only to find their favourite Christmas drinks like eggnog latter had returned but they were just be serving in Starbuck's regular white cups.

Come on Starbucks, surely you know it's not really what's in the cup the counts, it's the symbolism of that festive red cup! No one really actually likes the taste of eggnog in a coffee but you've got to have at least one every year to put you in the mood for Christmas and that's what holding that little red cup does.

Story continues below this face that really sums it up...

So I woke up early this morning to get a Christmas drink from @StarbucksUK to receive my toffee nut latte in A WHITE CUP? Wheres my red cup? pic.twitter.com/SAjjmyJH19

Personally I'm not convinced we've seen the last of Starbucks red cups for this year. There's lots of unconfirmed rumours knocking around that the cups might make a return to stores on November 10th, but this could just be confusion as that's when red cups finally make it to stores in the US following a limited run of green cups.

So, when we look at what's happening in the US right now... Starbucks fans expected their holiday cups on November 1st but instead they get a green cup, what happens next? Well the country dives to the brink of civil war and the press label Starbucks as the evil organisation that's waging war on Christmas. That's right, lot's of press attention and the piece of information running through to core of these reports is that the red cups return following the election on the 10th of November in America.

Another example of Starbuck's tendency to use this kind of marketing technique around #redcups was back in 2014 when Starbucks USA revealed their holiday drinks menu and customers were horrified to find that eggnog latte had been scrapped. After a couple of days of backlash and plenty of press attention and trending hashtags, Starbucks gave in and brought back eggnog. Miraculously they had just enough of the syrup tucked away somewhere to distribute at short notice to every store in the country, despite the fact they had no intention of selling it.

Back to the UK... you watch. They'll be backlash, it's already building today, press will pick up on it, the Mail, Mirror and Sun will condemn Starbucks for ruining Christmas merely by changing the color of a cup and then like magic, next week Starbucks will do the right thing and red cups will be back. In fact the stores I've spoken seem to have suggested that the cups have already been delivered and on their website the Christmas drinks are pictured in red cups.

However, if you can't wait until next week to get your hands on a Christmasy cup then you really need to see what's going on over at Costa this year. Costa always pull out the stops with their highly festive cups and this year they've outdone themselves and best of all, they're available as of today! 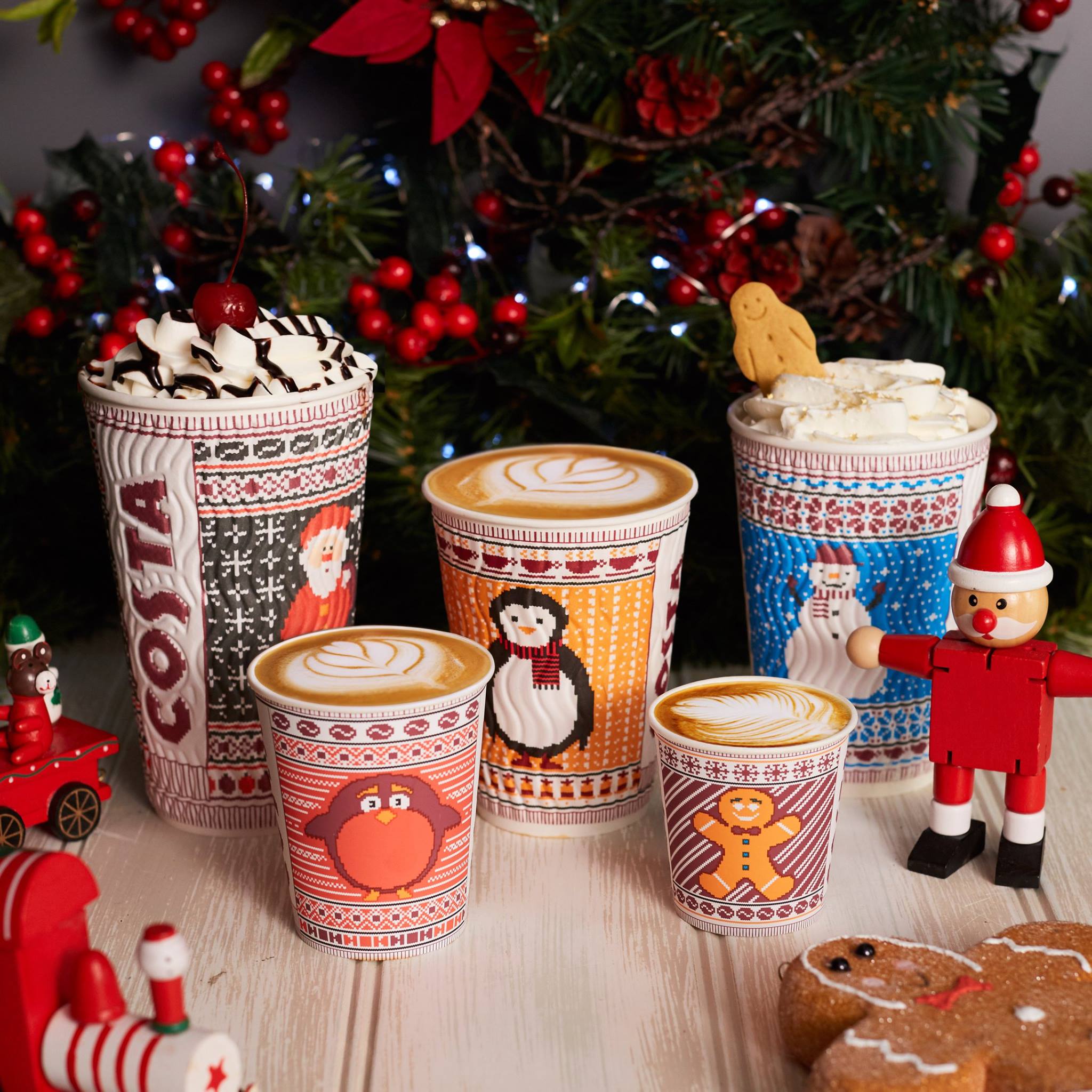 Last year Starbuck's in the UK launched a huge campaign to mark the launch of red cups. A huge four meter high red cup "cupmas' tree, was put up in London's Kings Cross station. Every time someone tweeted using the hashtag #redcups one of the 623 cups lit up. And let's not forget what happened on Twitter itself when you used that magical hashtag, a little emoji or a red cup appeared next to it. This was in fact the first time a brand has ever used one of Twitter's "hashflags." So this year, bigger and better right? Well, so far no.... just plain old white cups. Bah humbug! 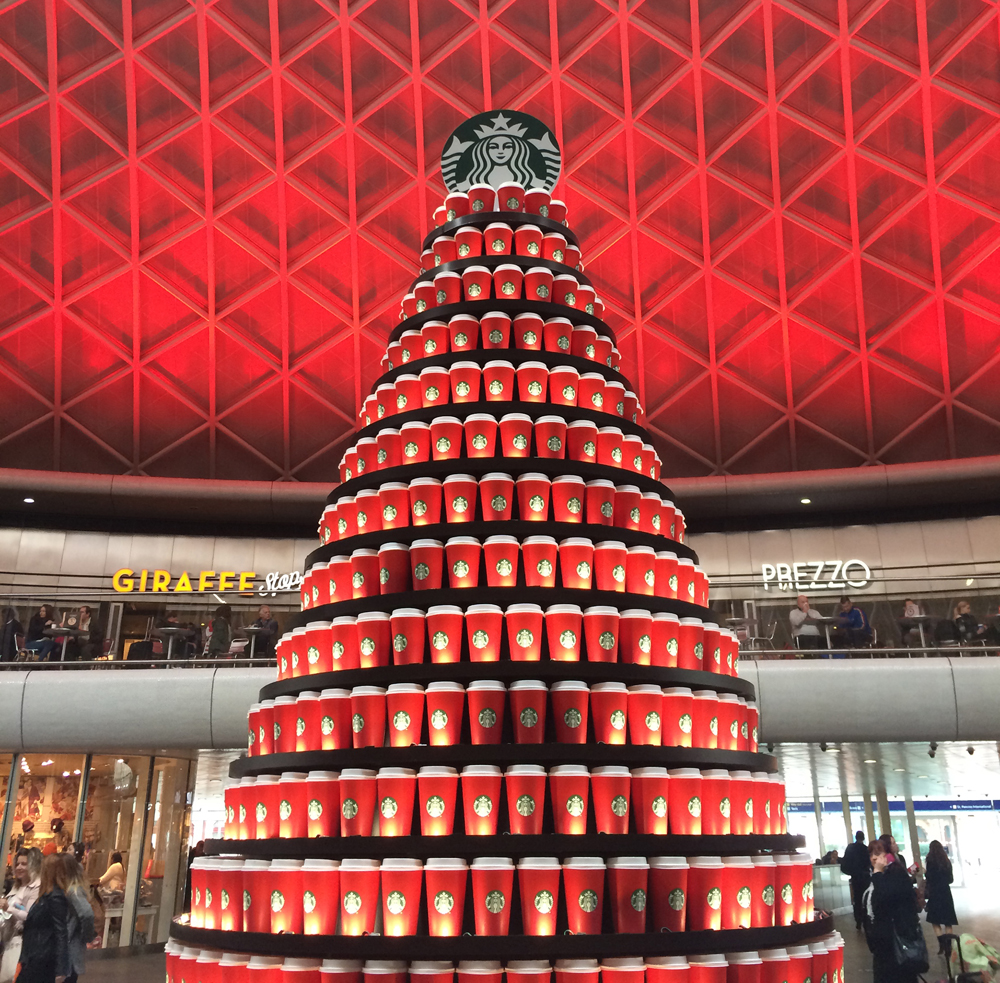 But have no fear, legendary BBC broom cupboard presenter, Andi Peters is on the case. Initially Andi tweeted Starbucks UK asking when the red cups were coming back, so I took the opportunity to tweet back with the news that they might not be coming at all. Andi tweeted a few minutes later, having phoned Starbucks for some insider info and he too came to the same conclusion that red cups will be back in the UK on November 10th.